Angelo Dibona, the history of mountaineering

To many climbers, Angelo Dibona was the star of freeclimbing, the strongest climber in the world of his time, in a class all to himself.

I personally repeated several of his routes: as I was climbing, my thoughts went to this thin climber who used to wear a hat, a hemp rope at his waist, a hammer, and a few pitons; he was able to handle these great vertical faces with easy elegance. I always remember him with glee because in his writings he constantly expressed the joy of climbing roped with his friends, never delving into sad stories or mountain accidents.
Born in Cortina on April 7th, 1879 in a poor family, he started climbing at a young age on the mountains surrounding Cortina, where he discovered his innate and instinctive talent for climbing.

His grandfather Angelo Dimai was the guide in several first ascents with the Austrian Paul Grohmann who in 1877 published the book Wanderungen in den Dolomiten (Walks in the Dolomites) which contributed to the popularization of classic climbing in the Dolomites and consequently mountain tourism.

Of average height, slender, lean, and quick, Angelo climbed up and down faces with no sign of difficulty or strain, always careful and precise in his movements. People tell that he trained on the side of his balcony by hanging just from his arms, he kept going back and forth until his arms held him up. He had started specific training on dry land at least fifty years ahead of its time.

During his service in the Austrian Army he became a Carrier at first and a Mountain Guide later; he was one of the first three ski instructor in Cortina, together with Celestino De Zanna e Bortolo Barbaria.

In the summer of 1910 he climbed with Rizzi and the Meyer brothers one thousand meters of the southwest face of the mountain named Croz dell'Altissimo. Famous climbers considered it the first VI level of difficulty in climbing history, and he handled a tricky overhanging crack using just two pitons.

In 1909 he took a look at the overwhelming North faces of the Tre Cime di Lavaredo and climbed the northeast corner, a beautiful, hightly satisfying route, currently one of the most popular in that mountain range.

Angelo didn't limit himself to climbing just the Dolomites, but he traveled to Germany, Austria, Slovenia, England and France, always opening technically difficult routes being recognized everywhere for his courage and his easy movements on any kind of terrain.

Both at the Reinhold Messner Museum on Monte Rite in Italy and the Saint Christophe Mountain Museum in Oisans, a large photographic space is dedicated to this great guide from Ampezzo. In Cortina the central square bears his name and a monument created by the sculptor Murer in 1976 is on display. 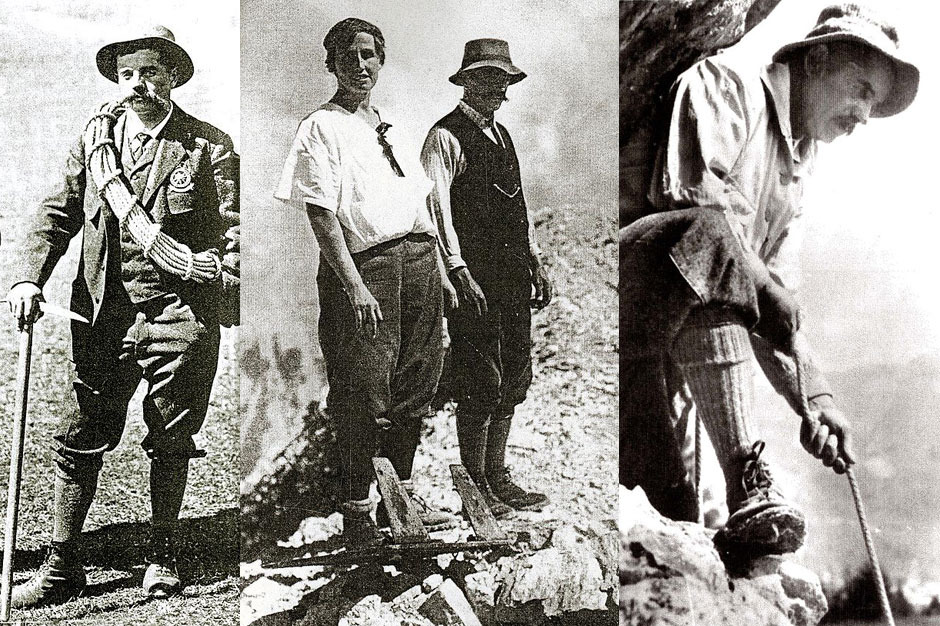 Angelo Dibona pioneered routes and led mountaineering expeditions all over the Alpine range, there are more than 70 routes named after him.

Here there are some of his most notable first ascents:

We are available to professionally organize guided excursion on the whole Dolomites range, always guaranteeing the highest level of competence and reliability